THE ALL IRELAND FINAL

The ILGU All Ireland Cup and Shield events sponsored by AIG were held this year in the prestigious Malone Golf Club in Belfast. Lee Valley Golf Club Minor Cup players were in contention there for All Ireland glory.

Lady Captain Bernie Costello and Team Manager Angela Corcoran described the weekend as being a very competitive one with a very keenly contested Semi- Final and Final.

The full team came together on Tuesday evening with some of the players making the long journey after a day’s work in Cork. The Ladies met for dinner and that was when the real excitement started to build up. The goal of reaching the finals had been achieved but the real work had now to be done.

Wednesday was designated as our official practice day but severe weather conditions prevented any serious effort being made. Some players and caddies ventured out on the course.  They walked it to reacquaint themselves with the greens and general layout of the holes. This was only of limited value as the weather really played havoc with their best intentions. Fortunately, the players had practiced on two occasions the previous weekend and so with their notes taken they were confident that the “homework” had been done.

We had an early start on Thursday for the semi-final encounter with Donaghadee. This Club had won the Minor Cup in 2015 and were favourites to take it again. Two of their former players were still on the team, and having “location” advantage, being only twenty miles from Belfast.  They had a much better opportunity to practice and prepare. We were expecting stiff competition from this club and that proved to be true.

Though nervous, all our players got off to a good start and were performing well for the first few holes. Coming through the ninth it seemed our strength at the back would provide the win on the day. Jane O’Neill in splendid form set down an early marker by claiming the first point for Lee Valley on the 11th hole. This was quickly followed by Breda O Callaghan securing another valuable point on the 15th hole. Both teams now had 2 points each.  The decider was left in the capable hands of Helen Gough.  Holding her nerve in the face of such pressure and with a large anxious crowd following Helen delivered the final blow to the hopes of Donaghadee with a great putt on the 18th.

The match was ours!

The match was ours and Lee Valley was now in the Final the following day. Great excitement followed that result!  Texts of congratulations and good wishes started flowing in. We learned that the other semi-final winner was the Connacht champions Mountbellew G C.  They were to be our opposition in the FINAL. The nerve wracking prospect of the competition next day did not dampen the girls’ enjoyment of the semi-final win.  They remained confident as they anticipated the final encounter.

The sun shone on the beautiful Malone course the following morning. There was a buzz of excitement as each team awaited the official call to the Tee. The Lee Valley team remained calm and composed with some light-hearted moments from Katherine Doran which distracted them from the “battle” ahead. Each match got off to a good start but as it progressed it could be described as “swings and roundabouts”.  It was very close and very keenly contested.

Going through the ninth hole our prospects seemed to be threatened.  We had just one player, Breda o Callaghan, up well in her match with the others running “neck and neck”. However when our team realised the position and were put to the test they galvanised their strength and determination to push for a win. Up front, Rosemary Driscoll was first to secure a point for Lee Valley by beating the star performer from Mountbellew on the 17th. This was a huge blow to the opposition and set the tone for renewed confidence in our team to claim victory.

Following next, Deirdre Lee was one down approaching the 18th but a magnificent putt on the very tricky 18th green evened the match which ensured that she was heading for a playoff.

Jane O Neill was similarly placed going up the 18th.  Her spectacular shot onto the green gave her an important advantage over her rival. She too was now going down the 19th.

Meanwhile, Breda O Callaghan was staying ahead of her opposition.  She secured the vital 2nd point by winning on the 17th hole. With the steely determination already shown up front, it was no surprise that Deirdre Lee closed out the match by winning the third point on 19th and secured final victory for our team. The team had achieved their goal to the delight of all the team members  and followers. A delighted Helen Gough was called in on the 18th   Whoops of delight and victory signs greeted our All Ireland win. It was a heart stopping but magnificent display!  A combined team effort over the two days showed that each player contributed to the overall result.  Each member giving of their best and delivering a valuable point for the win.

The caddies were a fantastic help to the girls!  They worked with them all through the campaign to help them along. Their contribution to the final success cannot be underestimated and the club is indebted to them for their generosity of time and expertise. The ball spotters on the day also provided invaluable help to the team and have our grateful thanks

The final long journey home to Cork and Lee Valley did not daunt either the team or the followers. We were greeted by an enthusiastic crowd on arrival… delighted to see the trophy, pennant and gold medals. The Mens’ club was represented by Mr. Captain Pat Power.   We enjoyed the champagne and finger food provided by the Keohane family and despite the travel fatigue, celebrations continued into the small hours. 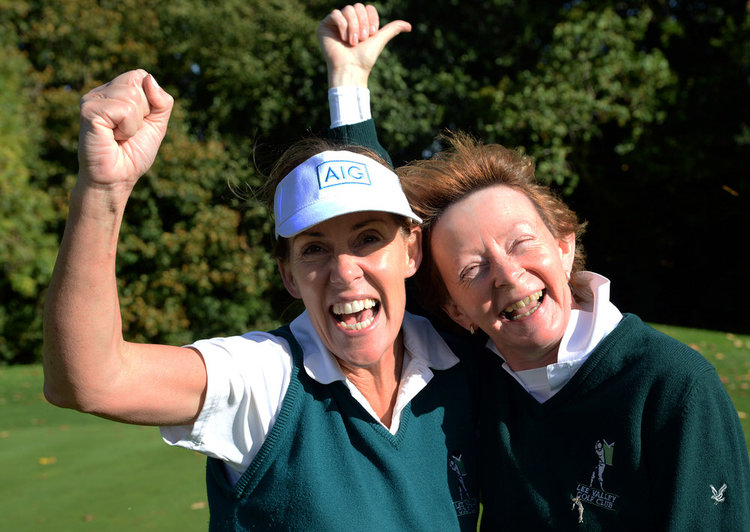 Lee Valley’s Deirdre Lee with her caddy Shelly Murray after winning her match on the 19th green to win the Minor Cup at the AIG Ladies Cups & Shields at Malone Golf Club today (29/09/2017). Picture by Pat Cashman 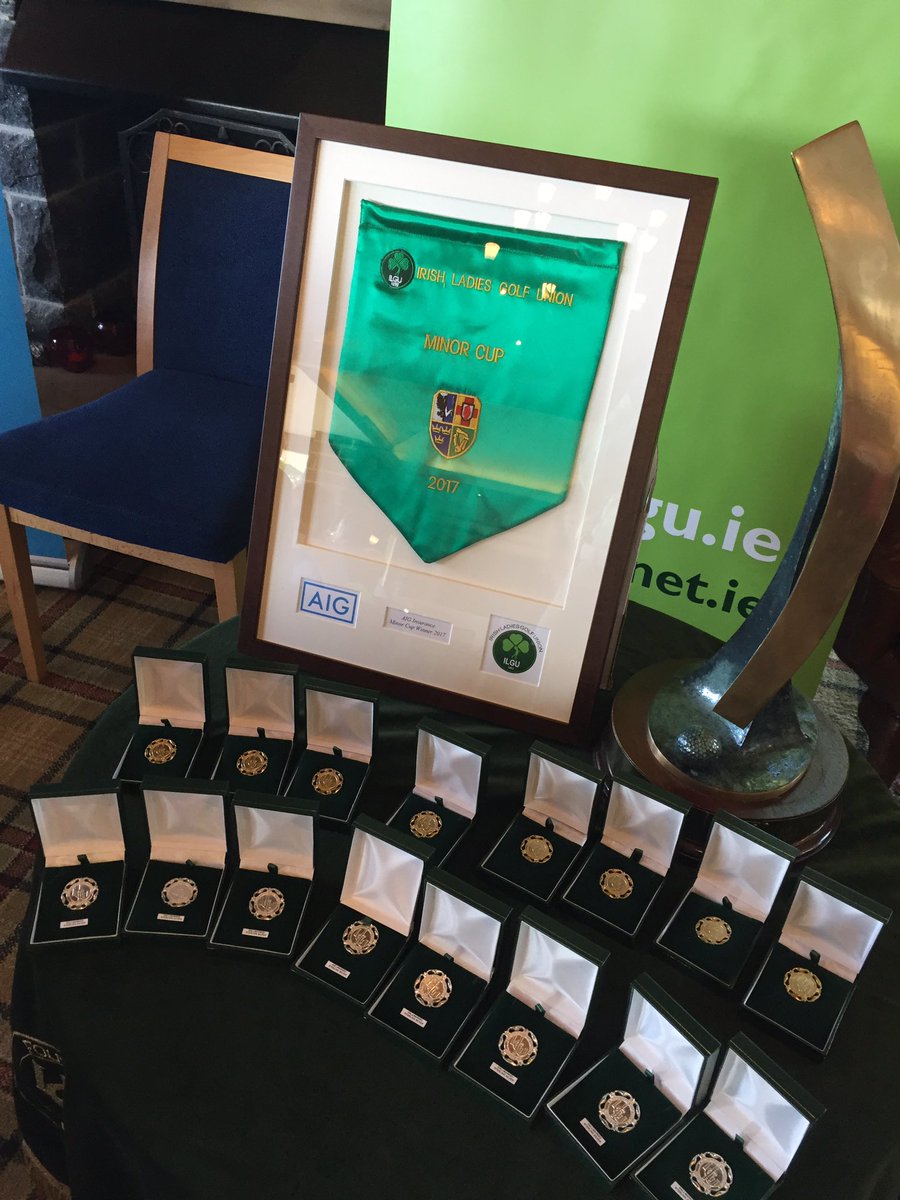